Did a float down the Saco with friend Sean and his girlfriend, Pauline. It was a beautiful day and the fish cooperated. I let them use spinning gear, and they caught many smallmouths. I even made a few casts and picked up a few fish on flies, including the biggest of the day; just threw the Peanut Envy fly over the side and was stripping off line to make a cast and BAM! Even for a trout snob like myself, I can admit they are fun to catch and fight like hell. The highlight of the day came when Sean decided to do a little snorkeling, and Pauline hooked a good smb. Sean was swimming around the fish as she fought it; it took a good jump and landed on Sean’s back! Too funny, but it gets better. After a few more tugs, the fish broke the line, and I see Sean dive under water, then start a hand over hand motion; no way, I though. Sure as sh*t, Sean had grabbed the loose end attached to the fish, swam to shore and hand-lined the bass in, saving his girlfriend’s favorite lure. If I hadn’t seen it myself, I wouldn’t believe it.

The trip ended strong (despite loosing my Peanut Envy to a fisty bass!), and Sean nailed the fish right to the take out. Capped off the day with a cold beer and lobster bun at bayhaven; pretty nice little Saturday! Here are the pics: 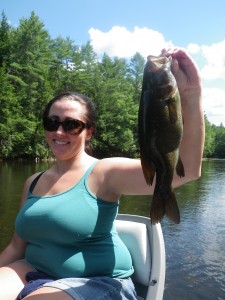 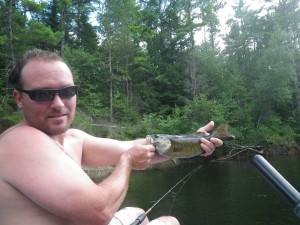 Little guy- who showed this guy how to hold a fish? 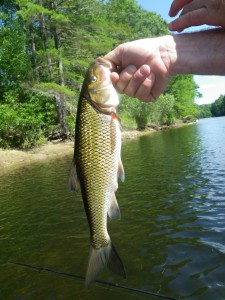