Just a few weeks left on most waters, except a few of the larger western Maine rivers. Water temps are in the low, 50’s, which is hard to believe with all the warm days. I fished and guided two different rivers this weekend, and found the fish to be willing, though a little sluggish. Water levels are lower than normal, for this time of year for sure.  Nymphs and streamers rule in the fall, but be ready for the dry bite if it happens. Also, don’t be afraid to add wet fly behind your streamer, or in front of your nymph, to up your odds. There are still some October caddis around, and swinging a wet can be deadly.

Here are some pics from Saturdays float, 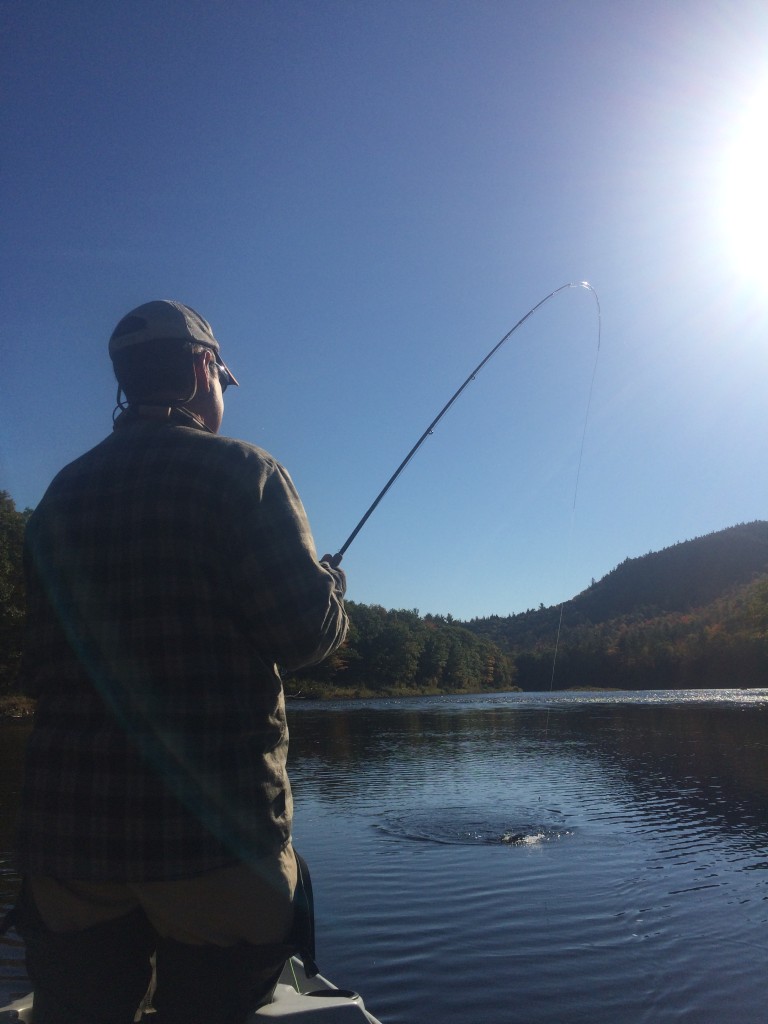 who doesn’t want to be this guy? 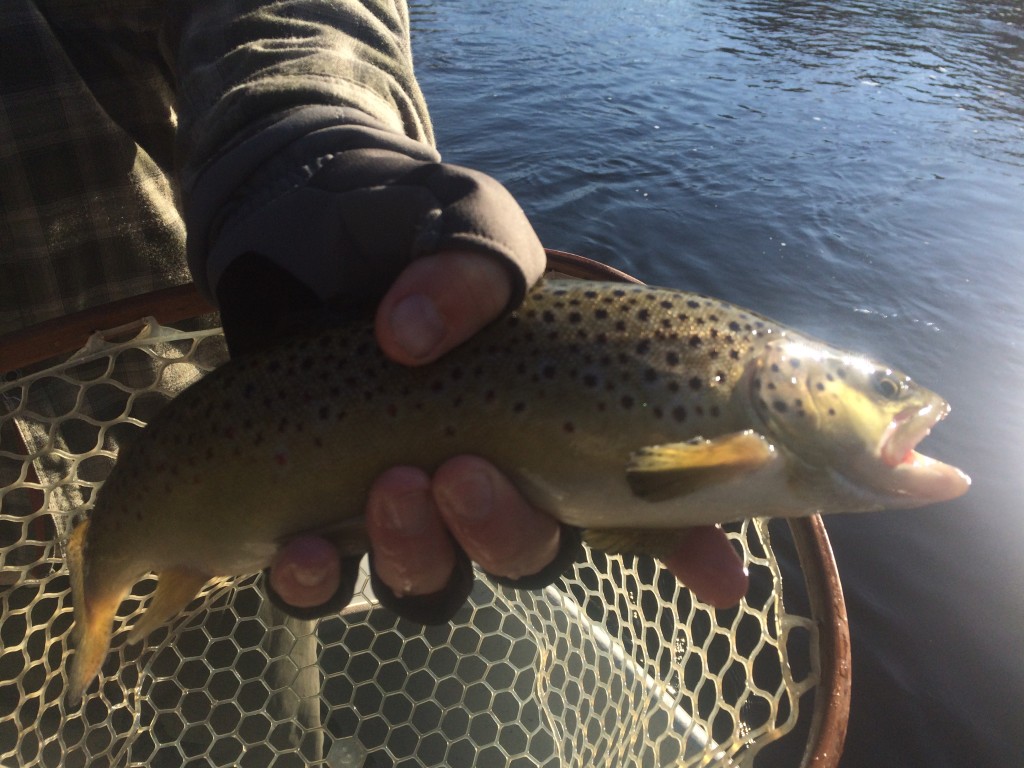 the trout, cooler temps, my weekly report, fall…. take your pick. The summer was pretty solid for smallies, as the temps in the upper rivers were even too warm for trout even through most of September. The 2-Fly Tournament was the 19th and luckily by then the temps had begun to recede to below 70. We did well, placing 2nd over all, as well as 2nd biggest fish, with a nice 15 !/4″ brownie. I was on the water this past weekend as well and was shocked to see water temps a full 10 degrees lower, in the high 50’s! Unlike most falls though, the water is un-seasonalbly low, and also, a severe lack in foliage color. Although the Andro is open year round, many waters will close next week, and some will give us to the end of October, so if you have any plans to get out and fish one more time, you better get after it. If you can, wait for after the next big rain.

See you on the water.

2nd Largest Fish at the 2 Fly 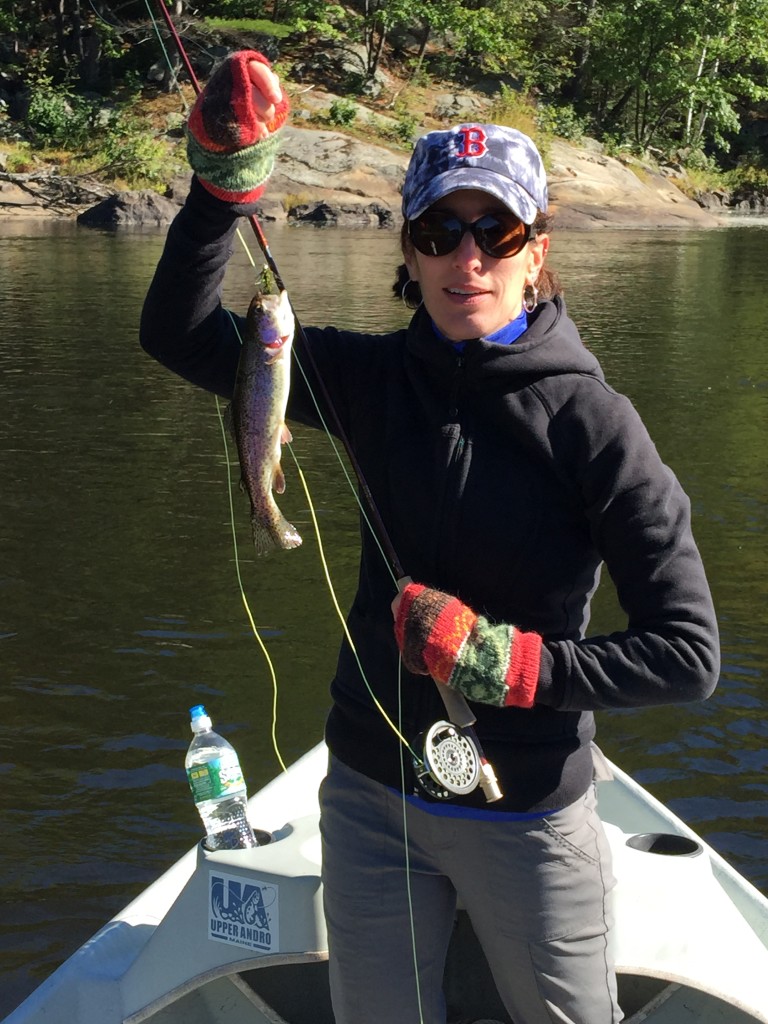 Lisa was a little cold, but her persistence paid off!

We’ve been pounding the bass water the last few weeks and getting some nice fish. We haven’t broke the 20″ mark (yet) but some nice smallmouths up to 19″, and very few under 14″. Topwater has been best, as even a slow day with topwater is better than a slow day sub-surface.

Hopefully the waters will cool the next few weeks and we can get back after our cool water friends, but ’til then, get after the bass while they’re still hot! 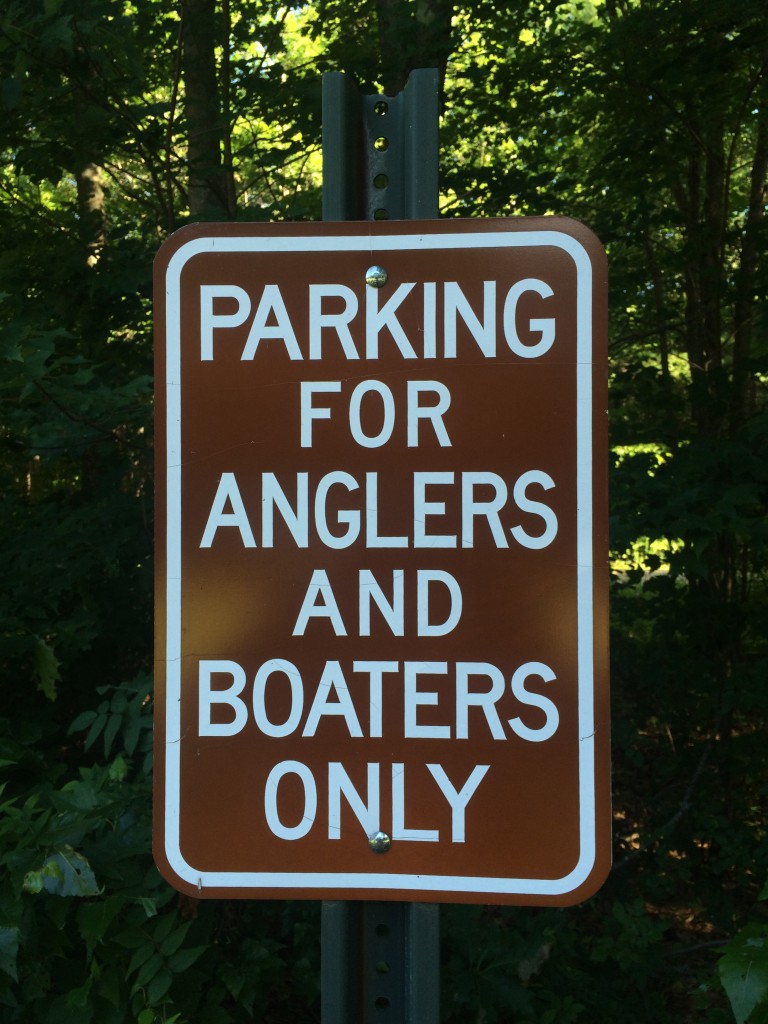 If you see one of these signs, you know you’re in a good place!

at least the trout on the Andro, for a month or so. Flows are good, but water temp is up to 72! Did a half day float yesterday and managed a few fish, including a brown on a #20 adams that was feeding on small mayflies with his buddies in about 3 feet of water! Amazing how these fish can survive, and feed, in shallow water under such conditions. Hopefully the rains will keep these fish healthy over the summer as I turn to bass floats and small stream fishing.

On the latter, I picked up an Orvis 7’6″ glass superfine that is just plain awesome. Nostalgia or not, this rod can cast way further than you need to and at no sacrifice. And when you hook a fish, game on!

Here’s a picture of the surface eater from yesterday 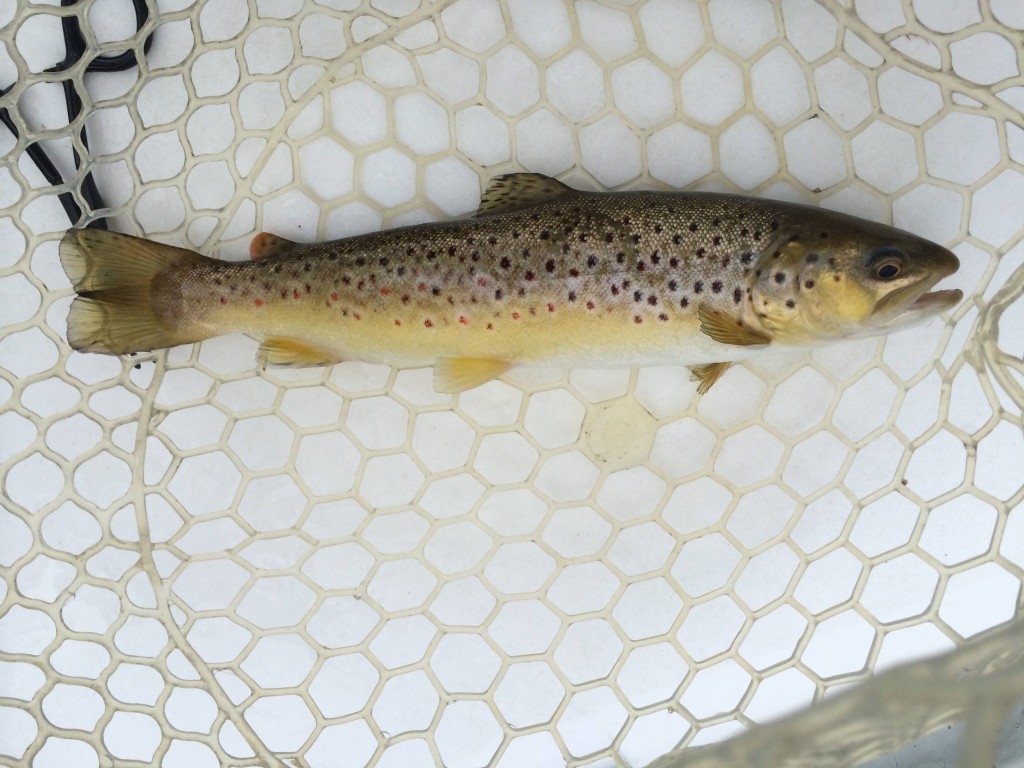 At least for the moment…flows everywhere are damn near perfect, and the water temps are holding nicely (2500 cfs and, 65 degrees on the Upper Andro). No guide trips on the holiday weekend allowed me to get a line wet myself with my neighbor Chris. We found plenty of fish, and lost track, but probably 20-30 trout. Hit a bunch of nice brookies 12″-14″ on dries to start, which was a blast, then fished streamers the rest of the day. Huge plastic (kayak) hatch in the afternoon made for some entertainment as well.

I expect the fishing to last another week or two until the hot weather warms the river temps to around the 70 mark. Fish can still be caught (especially at dawn and dusk), but it wont be as good as it is now, so anyone interested better get after it. Bass and small streams will be on the menu by mid month.

PS- All you sun-conscious anglers should check out Portland’s own 12wt. company, some great duds for the sun. 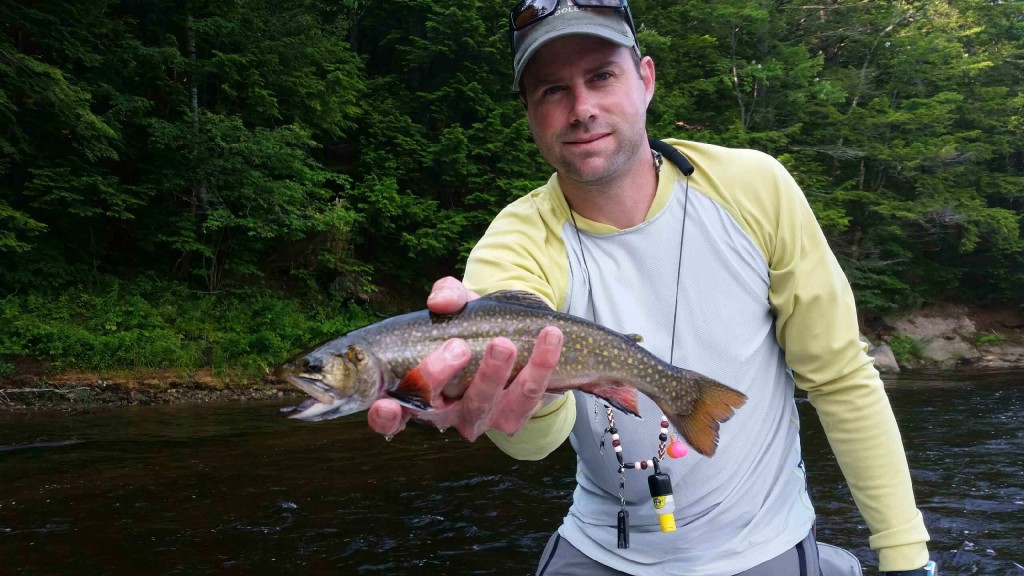 Chris with one of many fish- seemed like everytime I dropped anchor and started to cast, he’d have a bent rod! good times!

This month has seen a lot of rain, and flows in Gorham, NH have ranged from 1,600 cfs earlier in the month, to 10,000 cfs last week. Things settled to around 8k on Friday and we gave it a go. Though still off color, we were able to find some fish, 16 to be exact, plus a few more that got sore lips. The tribs were running clear, and we were able to find fish in some of the softer lies- ones that don’t even exist under normal flows. Father and son, Tim and Carl, had a lot of fun, and it was the first time the latter had ever held a fly rod, but by the end of the day he was casting like a pro. I see a fly rod purchase in his future.

As usual for this month, as soon as it starts to get good, we get another pounding of rain. I had to postpone a trip for a client this week for the 3rd week in a row! I keep promising thing will get better if he can just hold out. Good news is that all the rain should keep the river temps lower for longer (68 on Friday), and extend the season some.

Here are some of the highlights from Friday 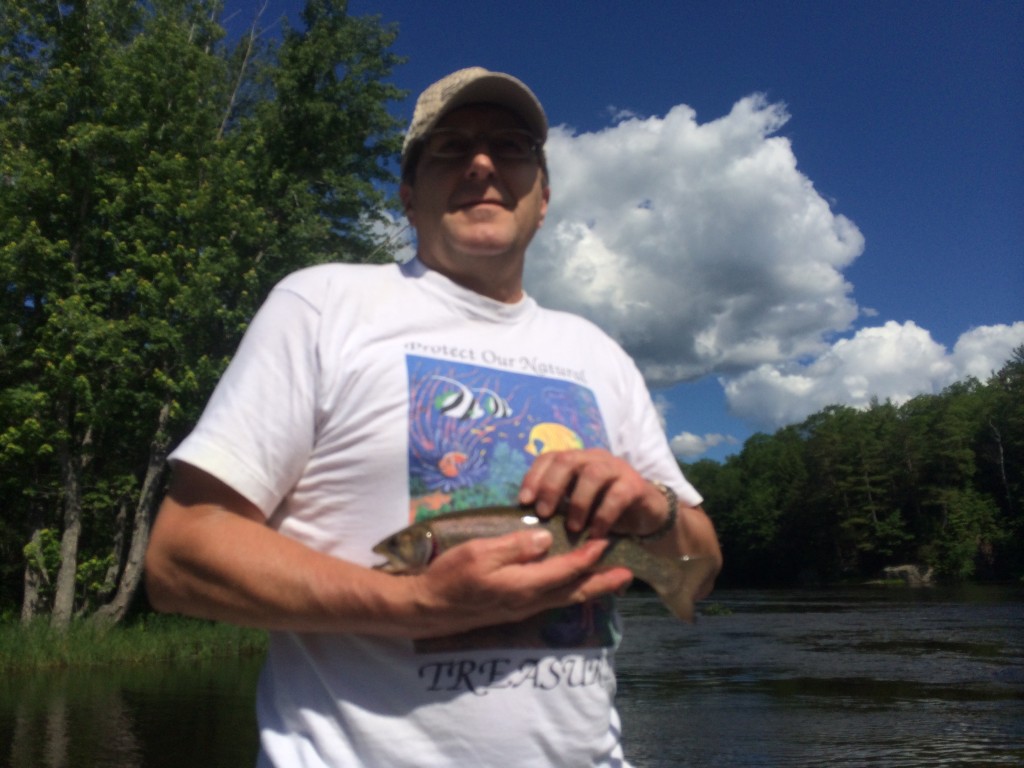 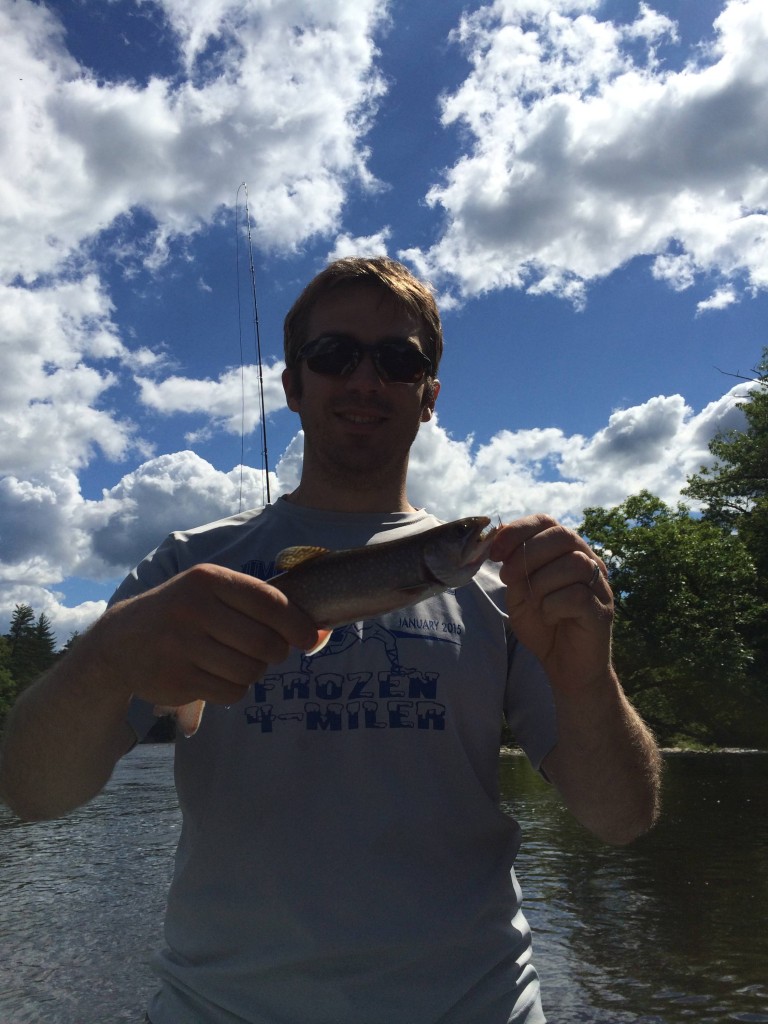 Not the best conditions, but still able to catch some fish. I have booking trips, but have also been cancelling/postponing trips every week it seem. Frustrating, as the last 2 weeks of June are typically the best. I hope things calm down after tomorrow….

Streamers and nymphs are still best. Don’t be afraid to go big, use dirty rigs, etc. Sink tip lines are a necessity, and when in doubt, add another BB to your nymph rig.

Here are some highlights from last week, including a nicely bend 3 wt. Superfine 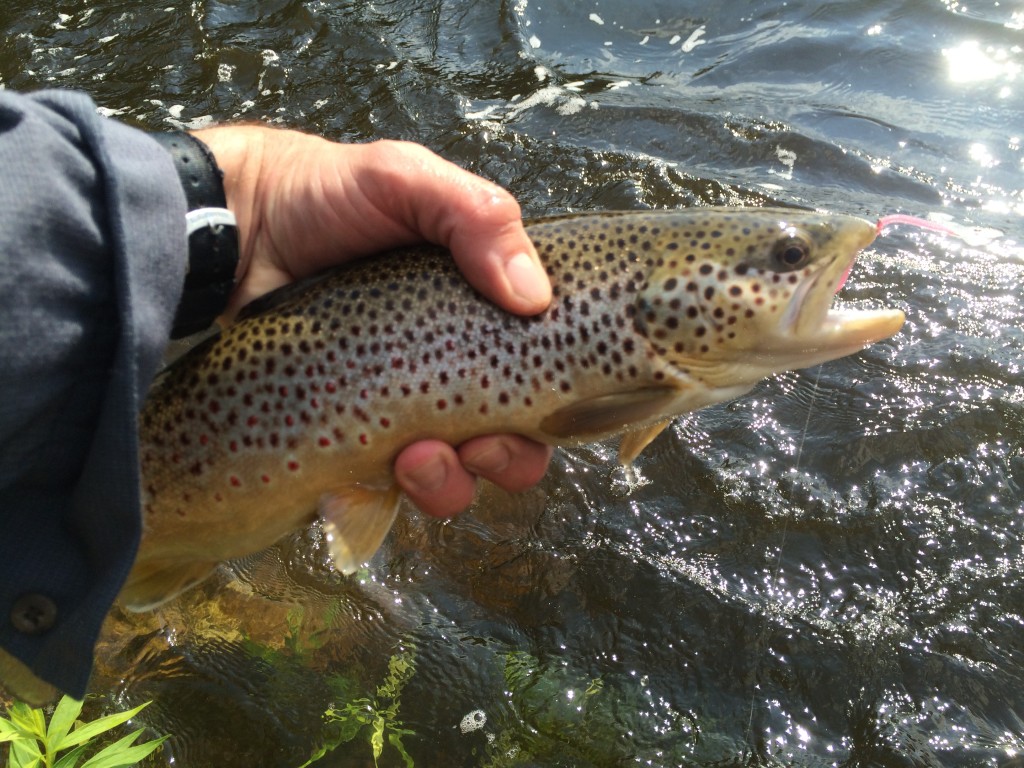 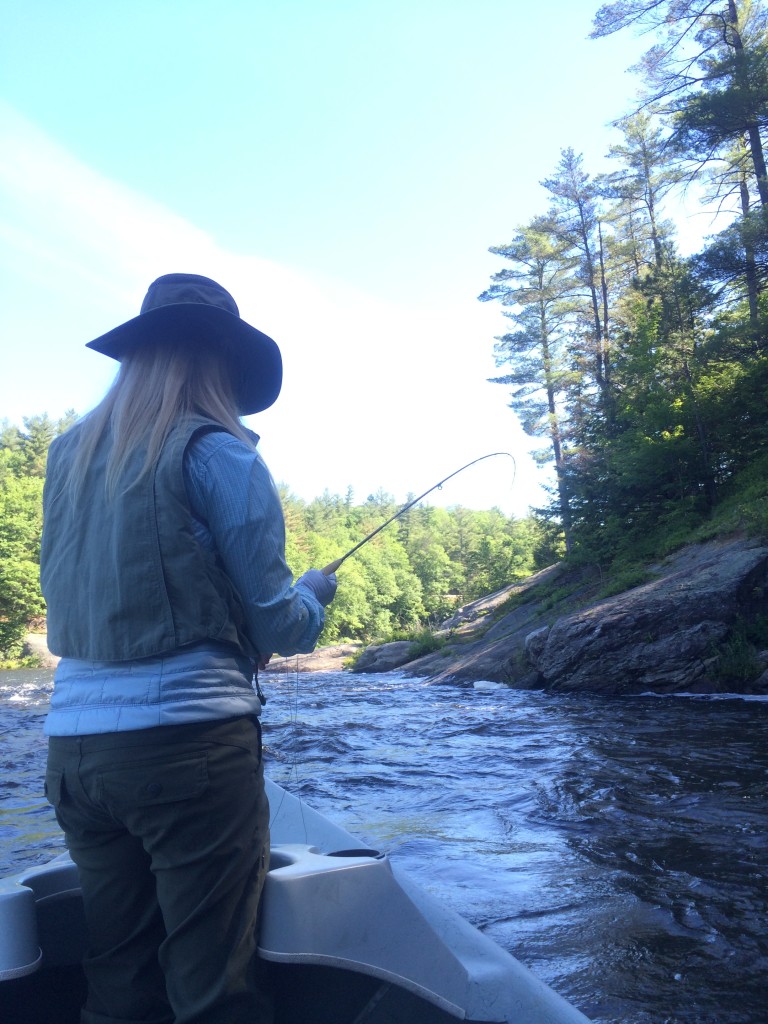 3wt being put to the test 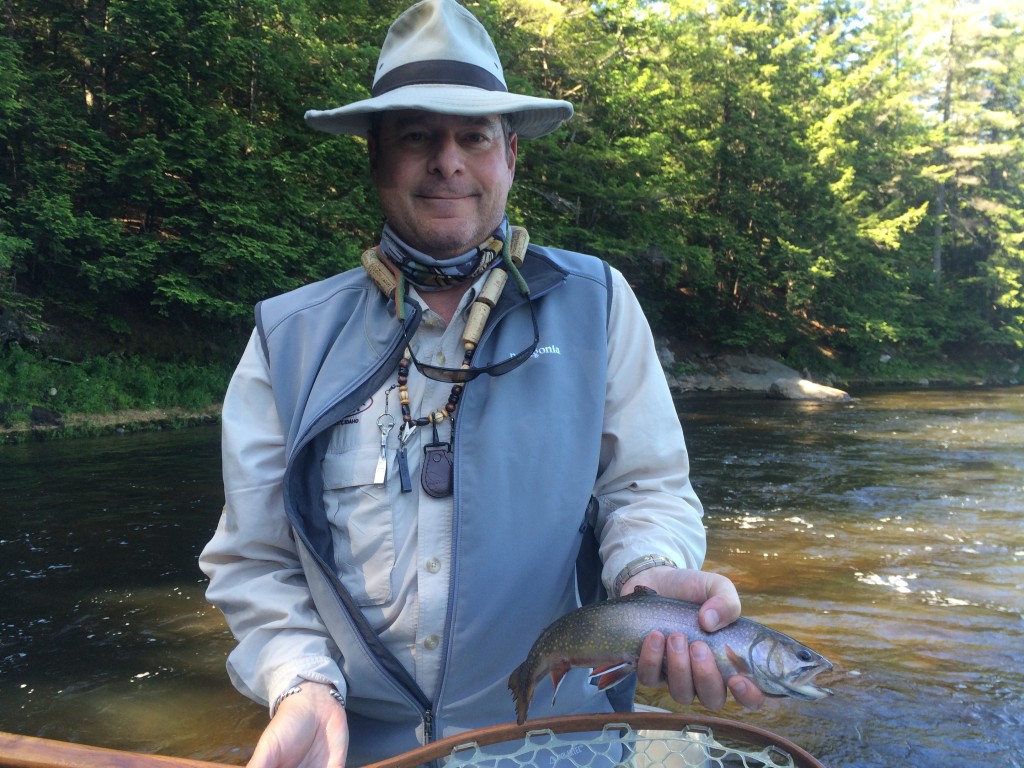 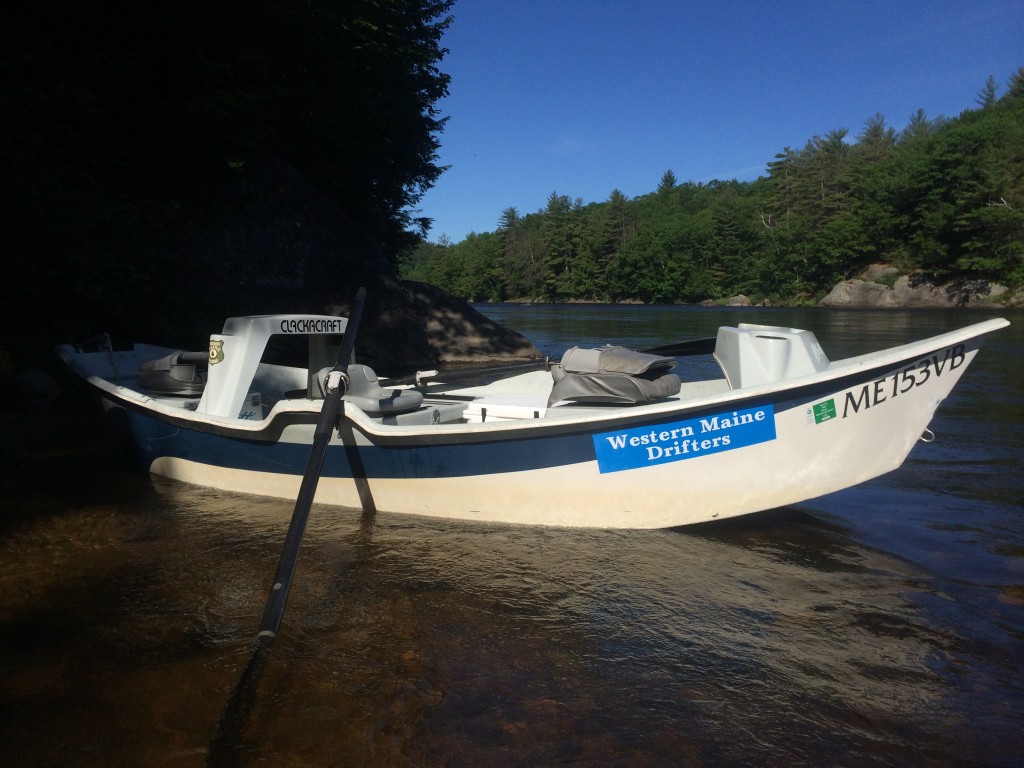 Tough wading now- come for a ride in this thing and catch some fish!

Too high now, in fact. The river went from 3,000 cfs to over 7,000 in Gorham, NH Saturday, as a result of some heavy rains in the north country Friday night. I was able to guide anglers from W. Virginia, Bud and Charles, before the storm on Friday, and we did well, landing a few good fish including a fat 13″ brookie, and a brown that was at least 14″, both of which put a hell’ofa bend in Charles’ 3wt! Unfortunately we had to cancel Sunday’s trip and postpone Monday’s due to the heavy flows, which should subside later this week as long as we don’t get much more rain. Good news is that this should keep the river cooler for longer, and the best fishing should be yet to come.

Here are some pics from Friday (the best ones are still on Charles’ camera, but I snapped a few with my ipone) 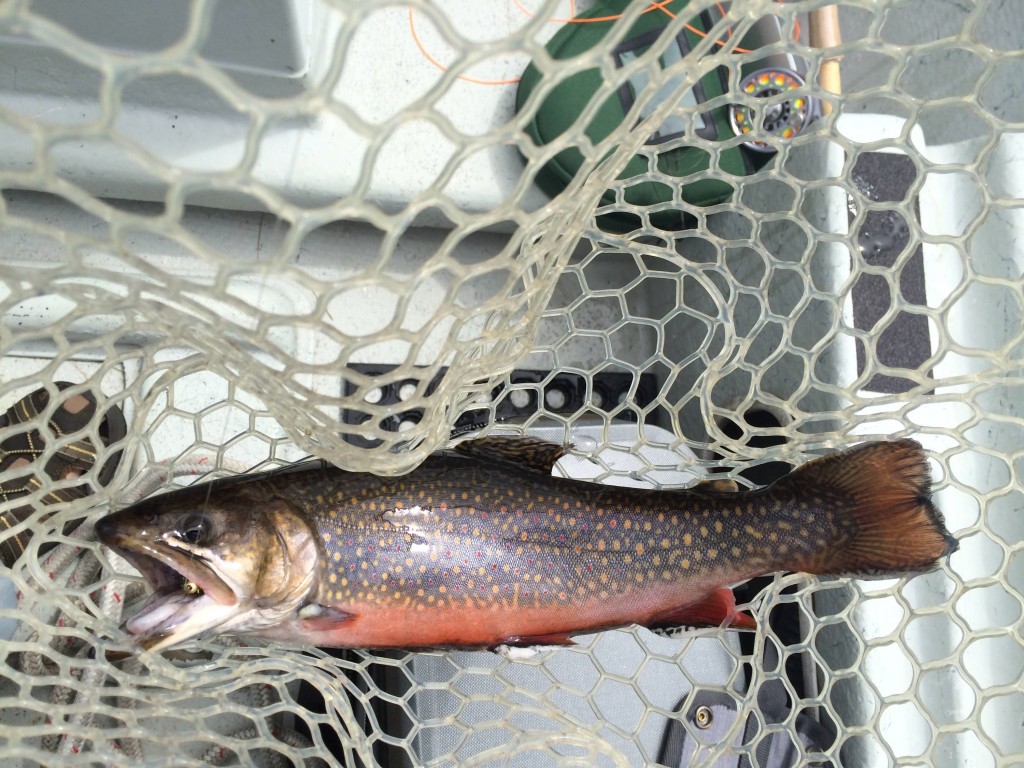 A colored up Brook Trout 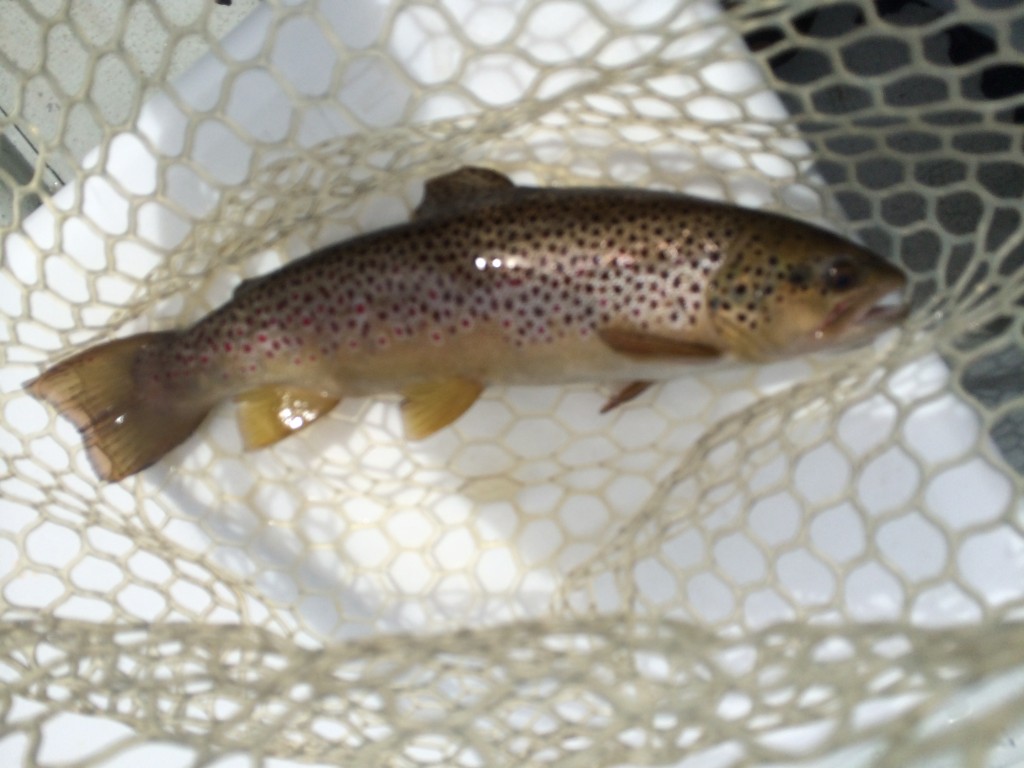 Unicorn Brown, not the best pic, but you get the idea. Handsome fish 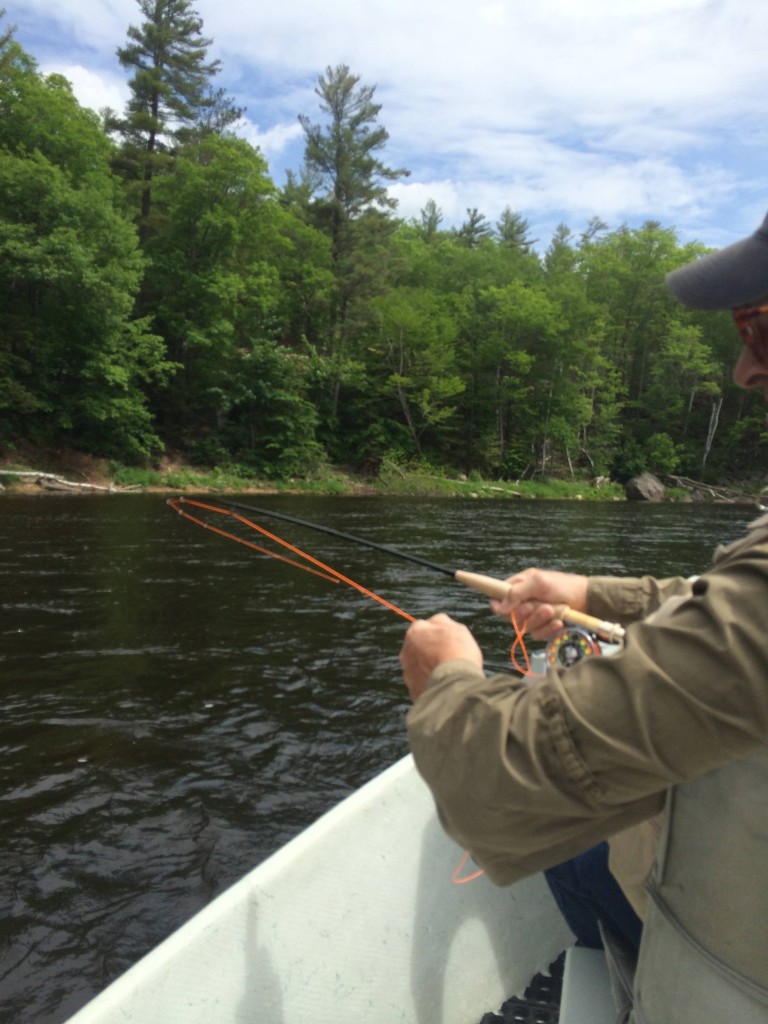 3wt putting the boots to a nice brown!

The fishing somehow has gotten even hotter, and I netted over 80 fish on a full day float on Friday. My two sports, Bob and Charlie, broke their previous record of 60-some-odd fish from a few years ago. Theses guys just seem to hit it right, and the fish cooperated, with a little coercing from my lucky flies. Landed a few good fish in the 14″-15″ range, including a nice butter belly brown. The much needed rain has brought up the flows and dropped the temps, and has helped disperse some of the fish I think.

Two more trips this week, and I expect the fishing to stay hot for the next few weeks, until the first dog days of summer come. Still a few dates open, don’t wait any longer!

Here are some pics from Friday’s slaying, 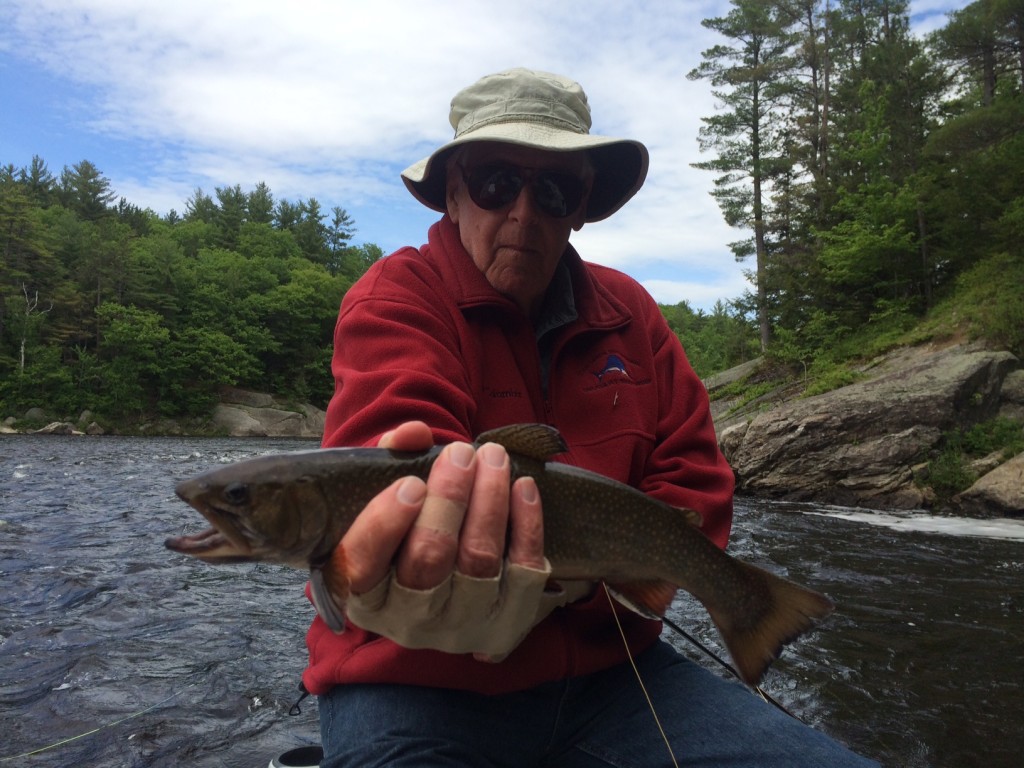 Bob with a good brookie 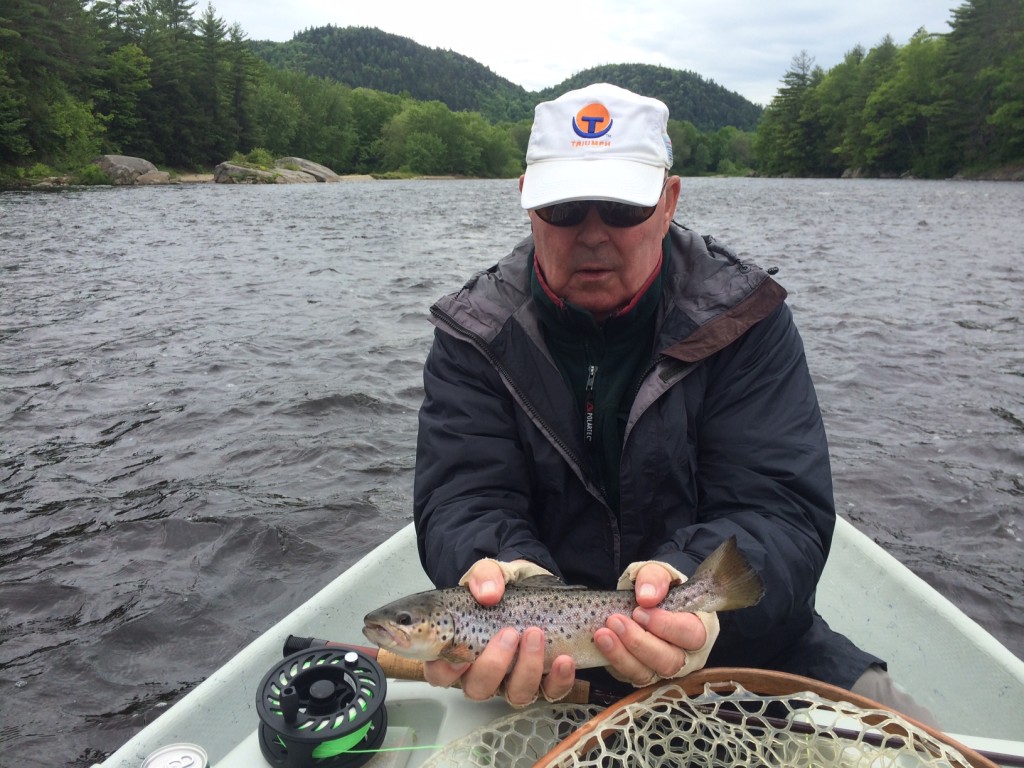 Not the biggest brown of the day (no pic of that beauty), but a nice fat one 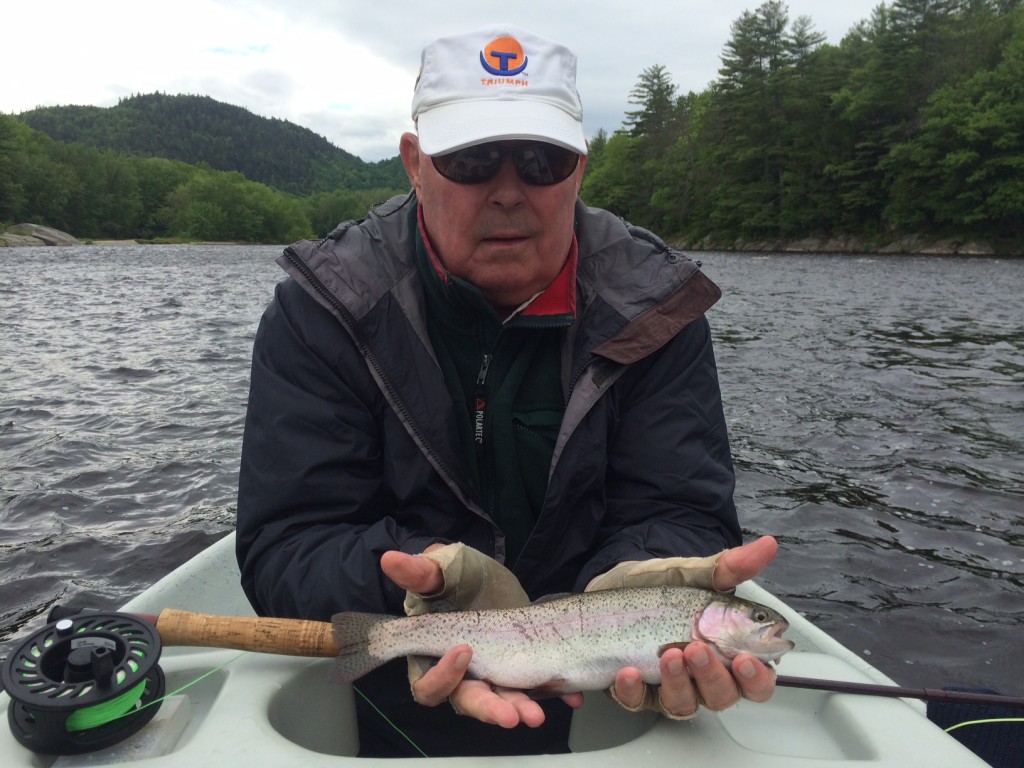 ..like donkey kong. Boated 31 trout Saturday on a half day with one angler. Lots of browns, some brookies, and a few rainbows. Also got a nice river tarpon (fall fish) to round out the Andro Slam! The dry fly game is still quite, but that should change soon (hopefully).

The fishing should be hot the next few weeks, with the much needed rain bringing the rivers back up to normal and keeping them cool (Upper Andro was 68!). This is the month to fish, and it seems like I am booking trips daily. Don’t wait, go fish! 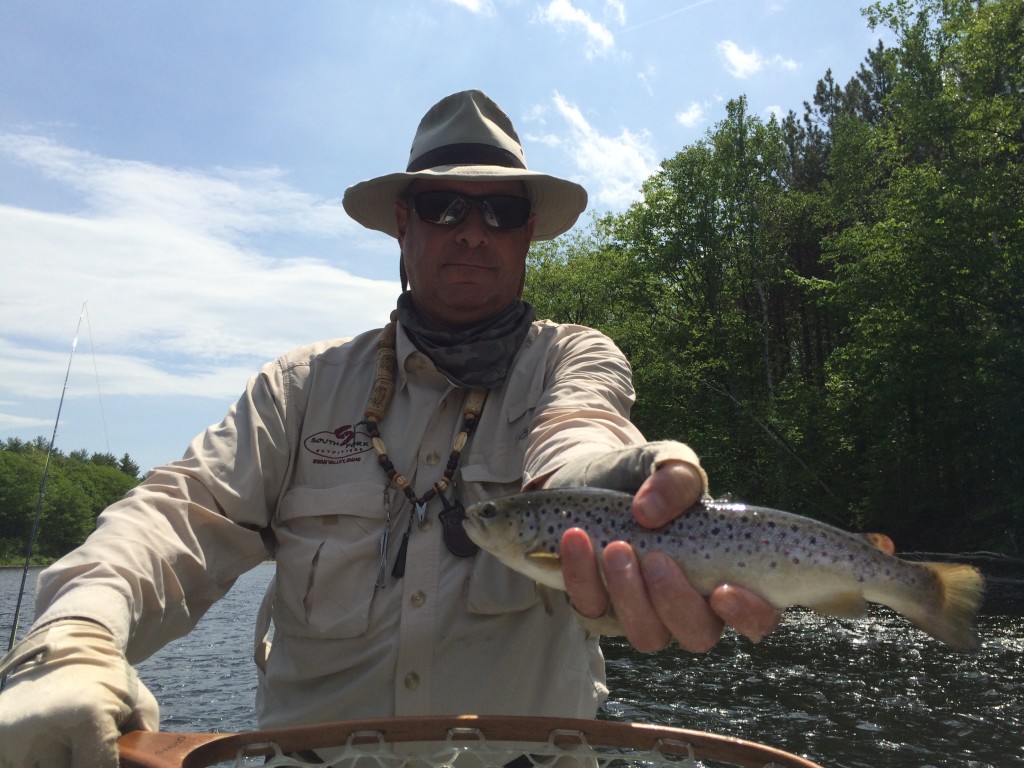